From 2001 to 2021, the past 20 years have been one hell of a ride but as we welcome 2022 and the new year in, has there ever been a more exciting time to be connected to the world of Entertainment?!
Posted on 22nd December, 2021 by Lauren Estwick 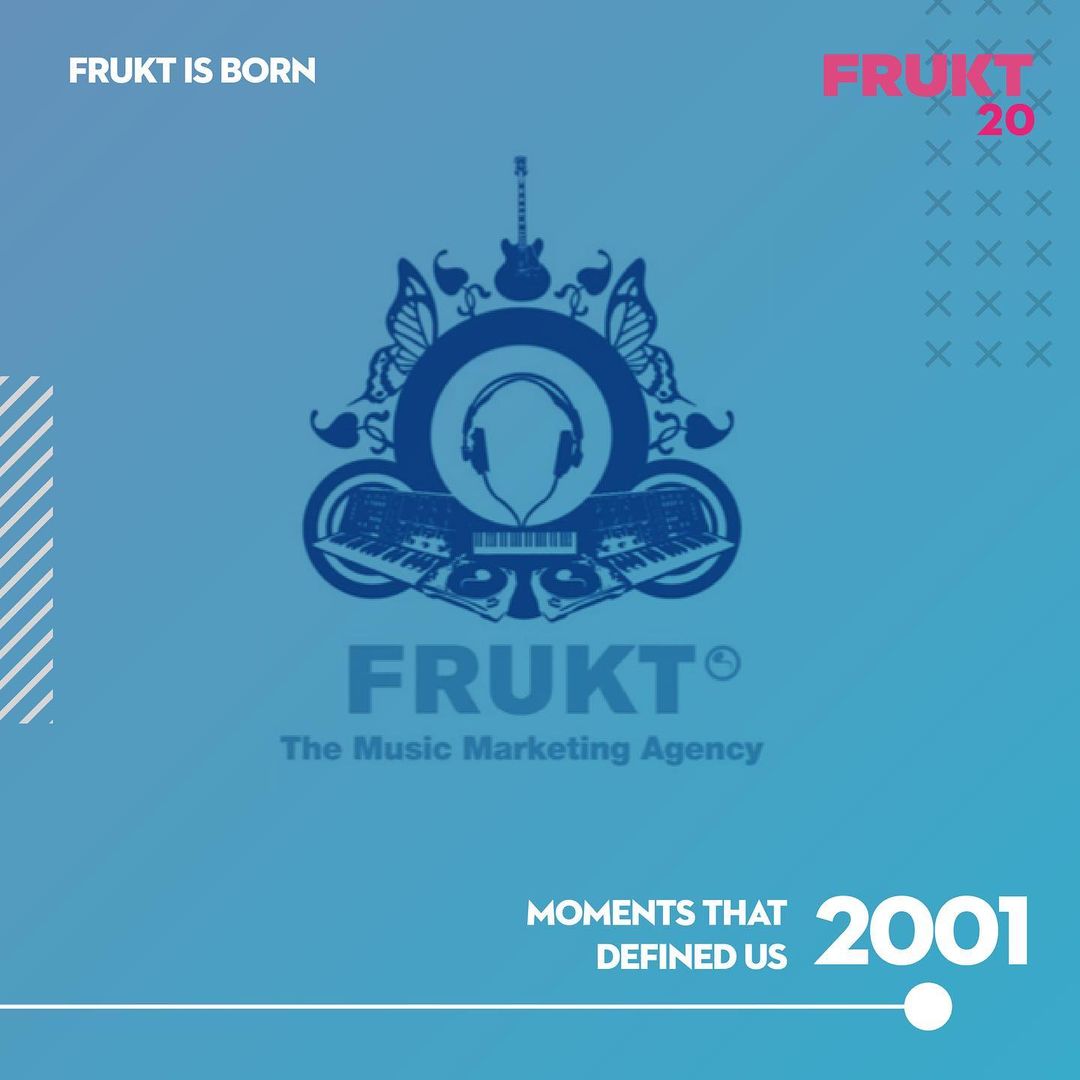 Two talented music industry misfits; a vision scrawled in biro on the back of a beer mat in a castle in Austria - and FRUKT is born.

"2001 saw the launch of iTunes, the birth of the iPod and utter global chaos caused by 9/11. Launching the world’s first marketing agency focused solely on music seemed like the obvious thing to do - disruption was always at the very core of what we tried to do with FRUKT, and it’s no surprise that our launch coincided with one the most tumultuous years ever." 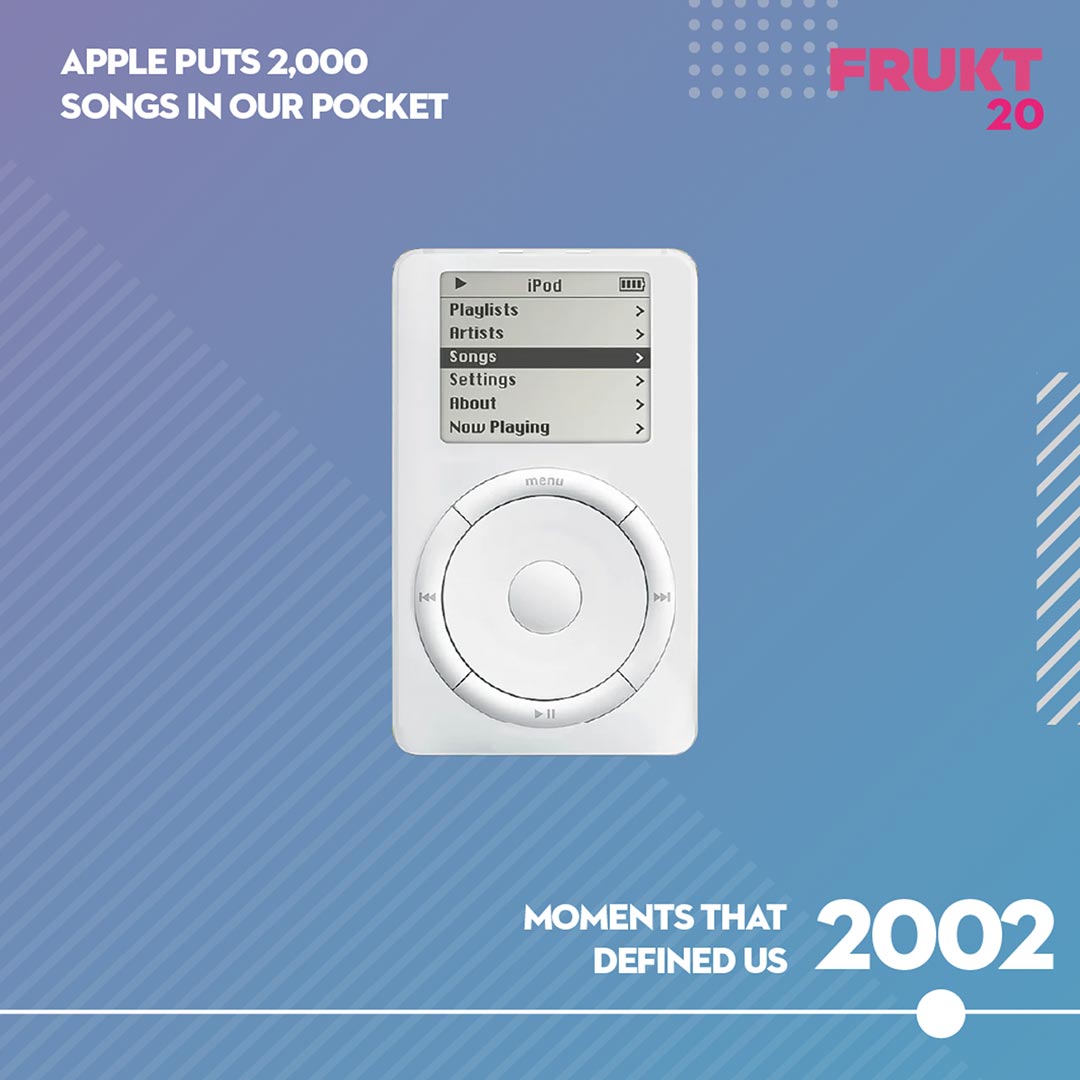 The second-generation iPod continues to change the world’s relationship with technology & music.

“Wow the second gen iPod was a revelation! To us now 20GB of music seems pretty standard but back in 2002, that seemed ridiculous! I vividly remember someone bring one into work and us marvelling at it. The marvel quickly turned to dismay as said colleague proceeded to play the entire ABBA back catalogue on repeat!“

At the time, we were in bed with the competition helping Nokia bolster its bundled music offering by partnering with the late David Bowie. However, we couldn’t help but be blown away by the beauty and power of this simple little thing”. 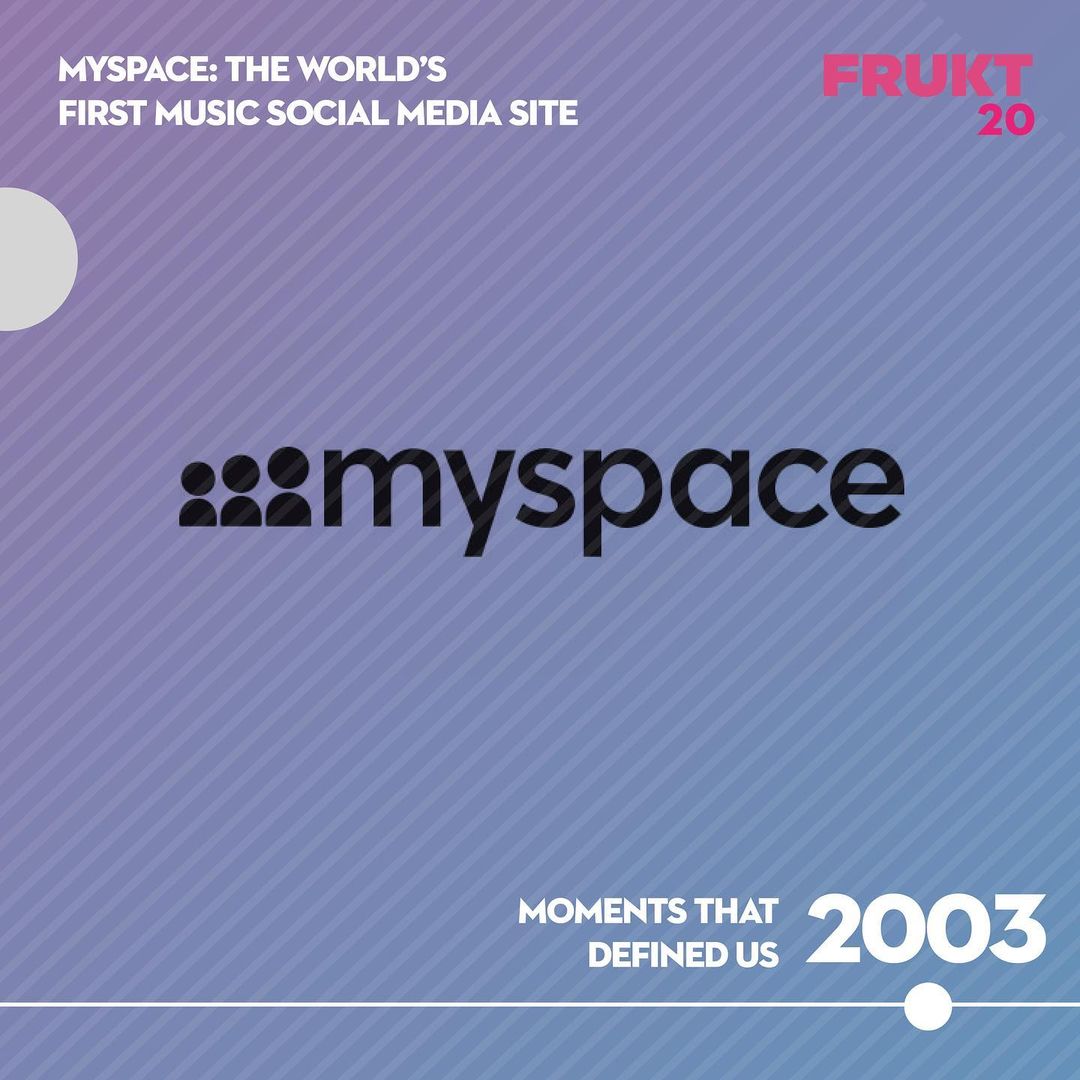 While we were working out a new ‘social’ etiquette, bands and brands were redefining fan relationships and getting us closer to the music.

“2003… the year I saw Massive Attack and Kings of Leon at the Brixton Academy - I felt cool. That was until Myspace. How could you pick a wallpaper that spoke to your eclectic tastes? Who would be in your top friends? What if you weren’t anyone’s top friend? How frequently should you change your profile song? I wouldn’t say that my social anxiety stems from Myspace alone, but it’s a little coincidental that Myspace Tom remains my most enduring friendship”.

At FRUKT, meanwhile, we were helping Topman take more ownership of their music activation. With Topman CTRL we combined band-curated monthly live gigs, with in-store activity and their first MySpace channel” 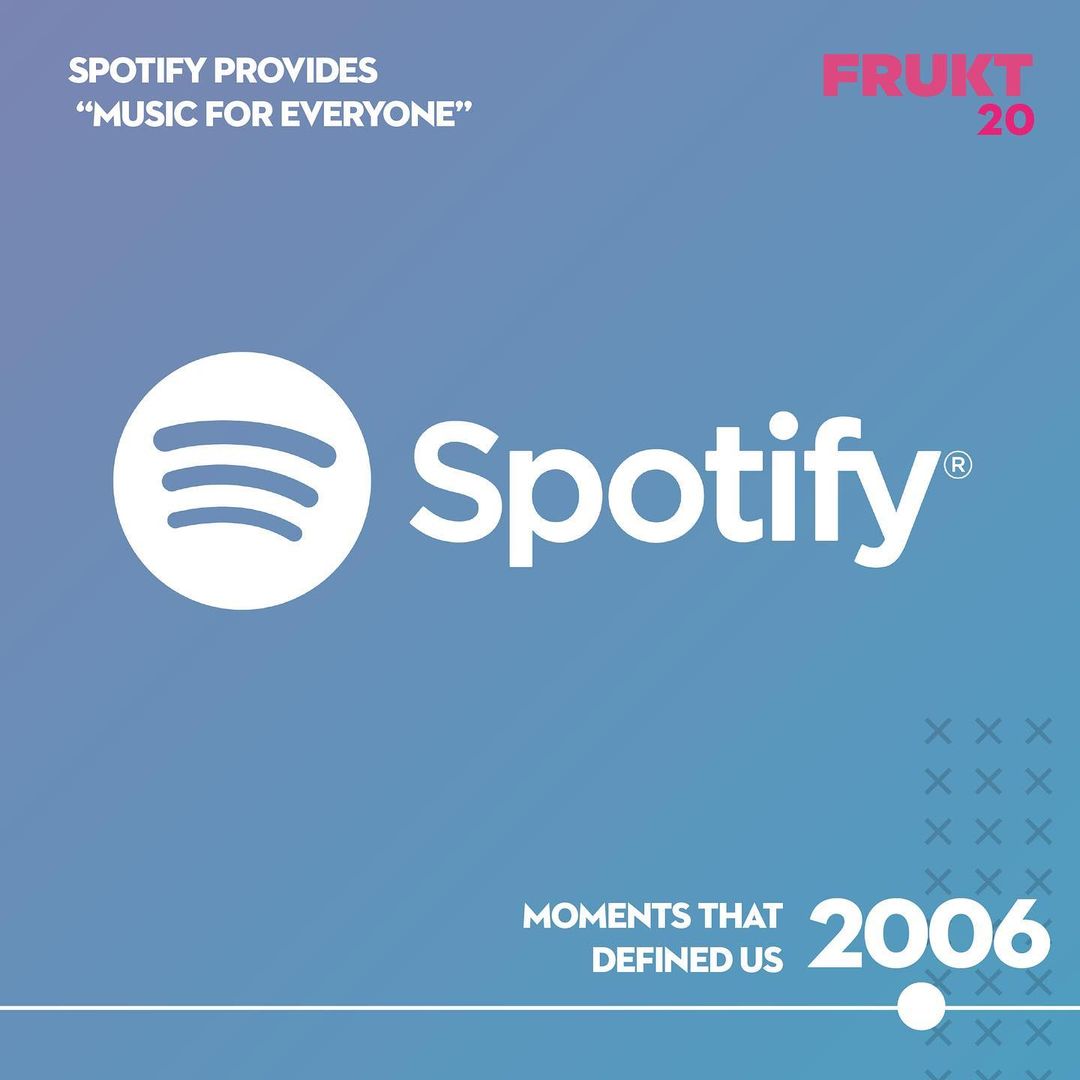 Daniel Ek, manages to persuade the labels that streaming is the future, while convincing us musical pirates that this was something worth paying for.

“When I first met and a young, ambitious but unassuming Daniel Ek for a coffee at Midem, little did I know that this would be the guy who changes music forever.  Our paths (indirectly) crossed again in the future, though, when FRUKT helped Coke create their first-ever Spotify hack-a-thon. Then later, in an industry first, we used their data to identify the hottest up and coming acts in cities across the world as part of the ibis Music programme.”

While Lars and co. were filing lawsuits against Napster, it seems they had a digital lightbulb moment – going on to launch their first direct-to-fan album concept (with a little help from FRUKT).

“When we were asked by Universal Music Group to support the global rollout of Metallica's first direct-to-fan platform (at a time when only 20% of the planet was connected to the internet), we thought: why not? A project with bold ambition, big personalities, late nights, and ultimately a standing crowd-surfing ovation. We were humbled and honoured to be part of it.”

6. 2009 – League of Legends: the birth of the world’s largest esports community 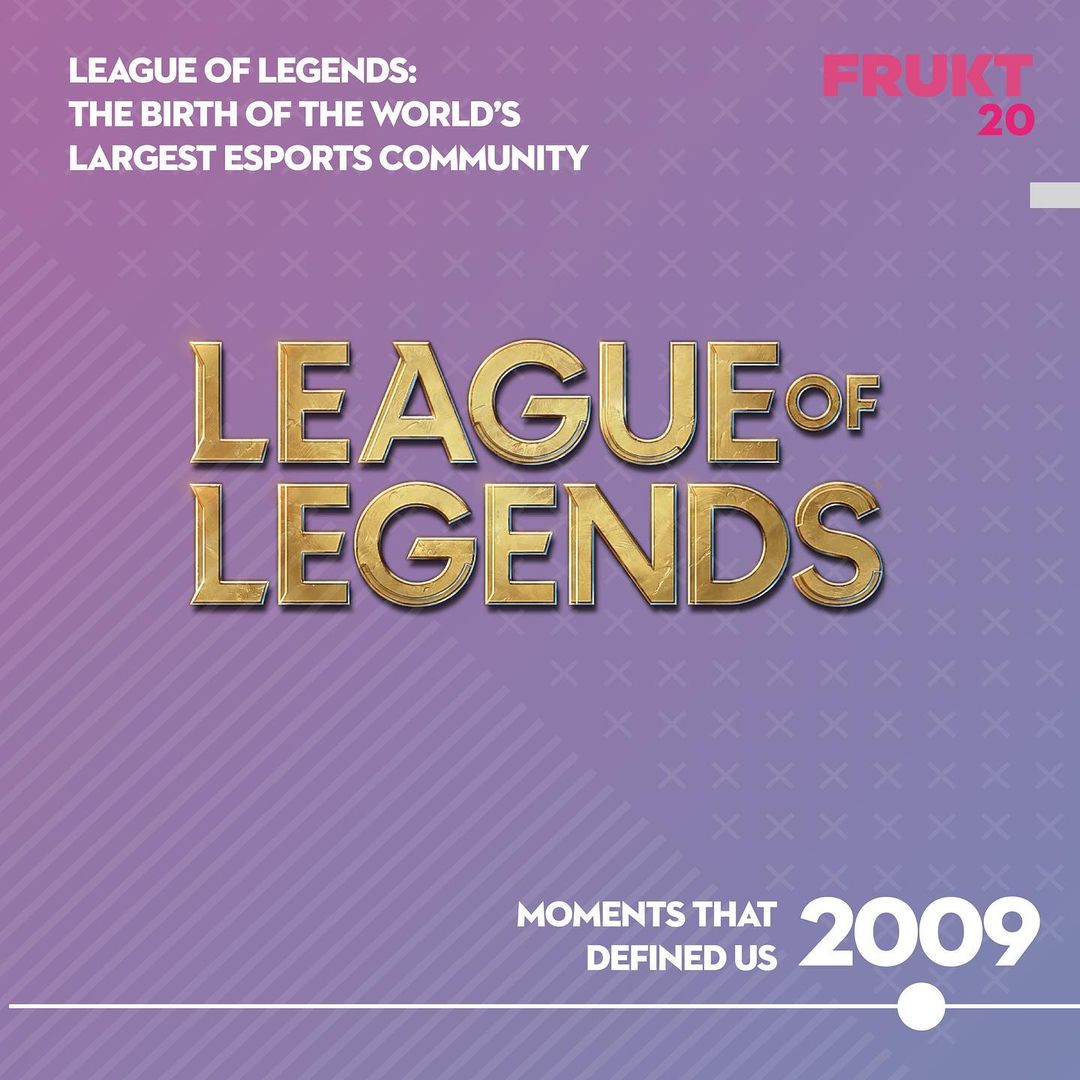 Free-to-play, easy to learn but hard to master. With ten new battles starting every second, it now has a 100 million global audience and is one of the biggest games in world.

“Since the humble beginnings of simply looking to offer DotA fans a fresh alternative, League of Legends has not only grown to be a game that attracts a gobsmacking 4 million players & £3 million from transactions every single day but has also forged the path for bringing esports into the wider cultural zeitgeist, collaborating with the likes of Nike & Louis Vuitton.

At FRUKT, we helped Mastercard extend its “Priceless” platform into the Esports arena. Hot on the heels of the brands first-of-its-kind, ground-breaking global agreement and multi-year partnership with Riot games for League of Legends Esports, now in its third year.” 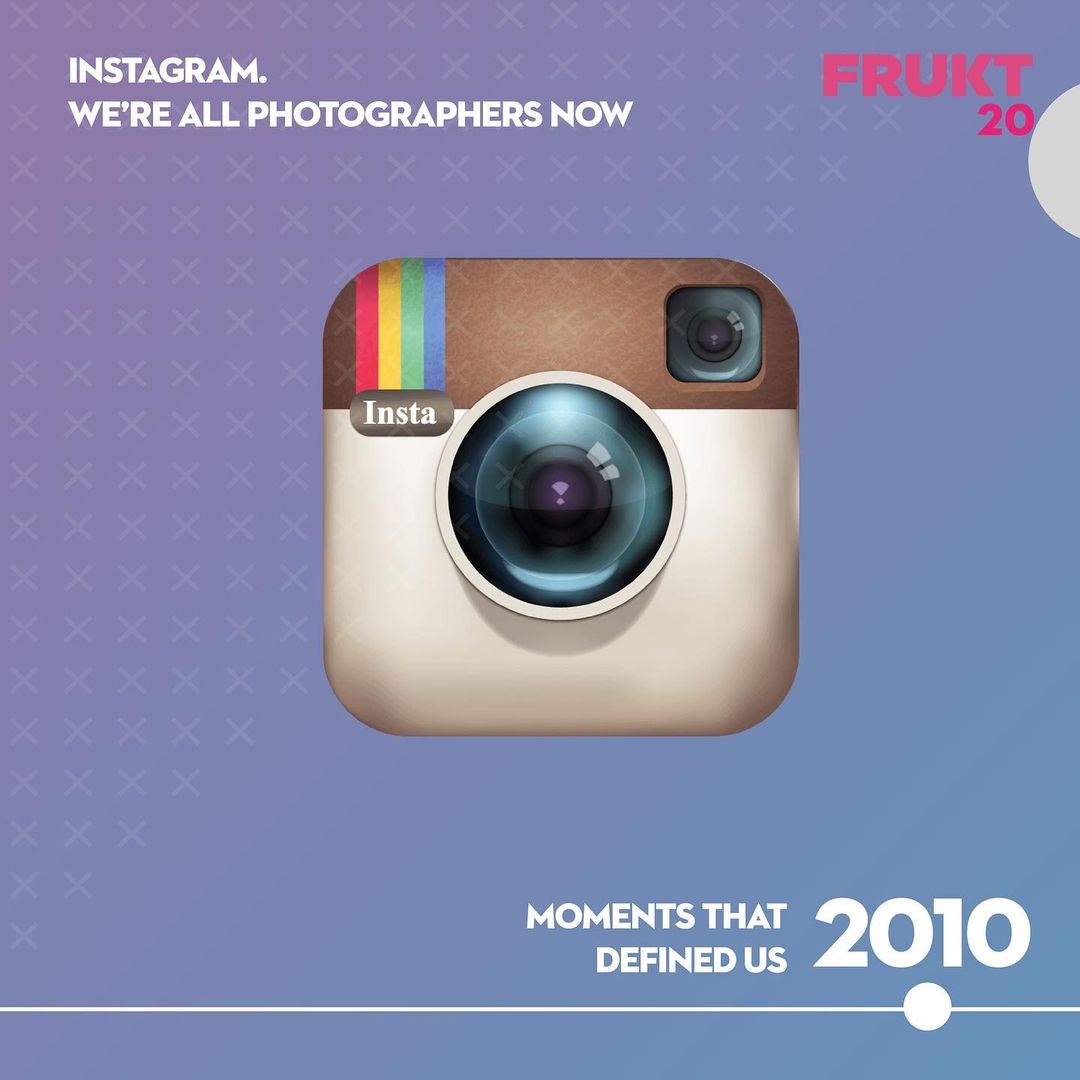 Kevin Systrom, a 27-year-old Stanford University graduate reinforces the old adage that a heavily-saturated-filtered-picture is worth a thousand words (and about a billion dollars, if you’re Facebook).

“From 2010 with one million registered, to one billion as of June 2018, Instagram has changed the way the world looks at not only people lives, but has also kept us all in touch with music the last 18 months. Instagram became music’s best concert venue with over 250,000 tuning to James Blakes & Coldplays covers, and a personal favourite Tame Impala’s 10-year anniversary concert.

Their original Instagram tagline: “Capture and share the world’s moment”, strikes a chord with the work we did for O2. “Relive the night” enabled music fans to receive a digital memento of their live music experience and relive those unforgettable moments.”

65 Great Britain medals, third in the table and there’s only one Danny Boyle. Meanwhile we helped Coca-Cola tour the country and celebrate in Hyde Park with 100,000 smiling fans, seen by 100 million globally.

“In our six years as lead Coke UK music activation agency, the London Olympics was something extra special. The smiling volunteers, the impeccably organised event, a regaining of national pride – the positivity that flooded across the country.

For the Coke Olympic Torch relay, we secured 16 artists to play 66 consecutive nights as the Olympic Torch travelled to within 10 km of 95% of the UK population, culminating in a finale at Hyde Park with 100,000 smiling faces, seen by an audience of 100 million worldwide.

It not only made me realise how “open happiness” was the perfect brand fit, but how happiness seemed to be the overwhelming national emotion in the summer of 2012. To be part of something that united the country while putting it on the global stage was just as much a privilege as it was exhilarating. It’s an enduring brand-relationship we’re proud to be part of to this day.”

9. 2013 – Netflix started producing its own content (House of Cards) 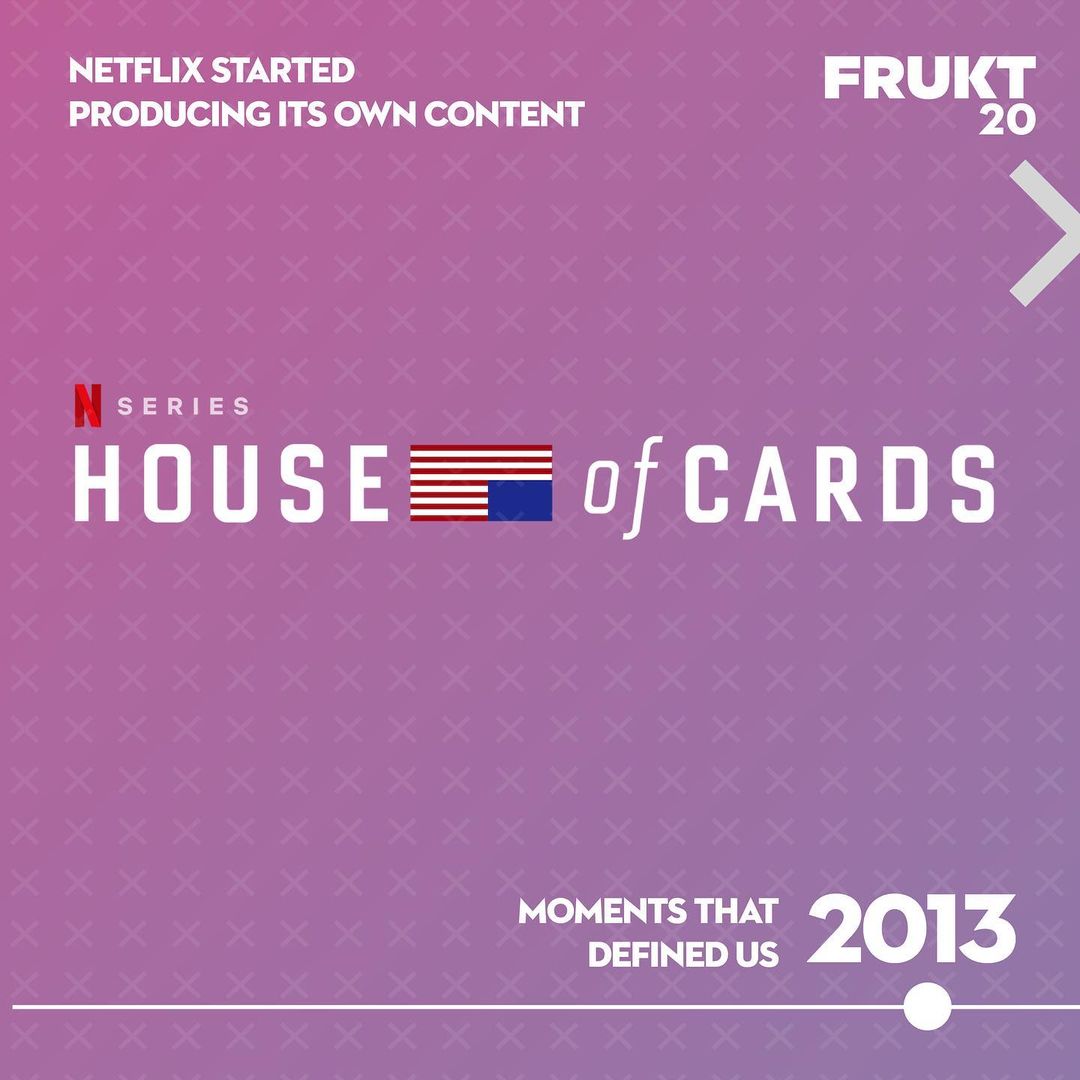 “From a video delivery service to an entertainment revolution. 2013 saw the birth of original content with “House of Cards” Season 1 released in its entirety - announcing a new advent of binge-watching. And this year’s most bingeable show?  Squid Game - completed in two hair-raising sittings by me. Netflix is now a non-negotiable in our house and in our lives. The team here at FRUKT know a thing or two about creating suitably compelling experiences too, putting on an immersive red carpet event for another popular Netflix original “Maniac” in 2018 at London’s Southbank Centre.” 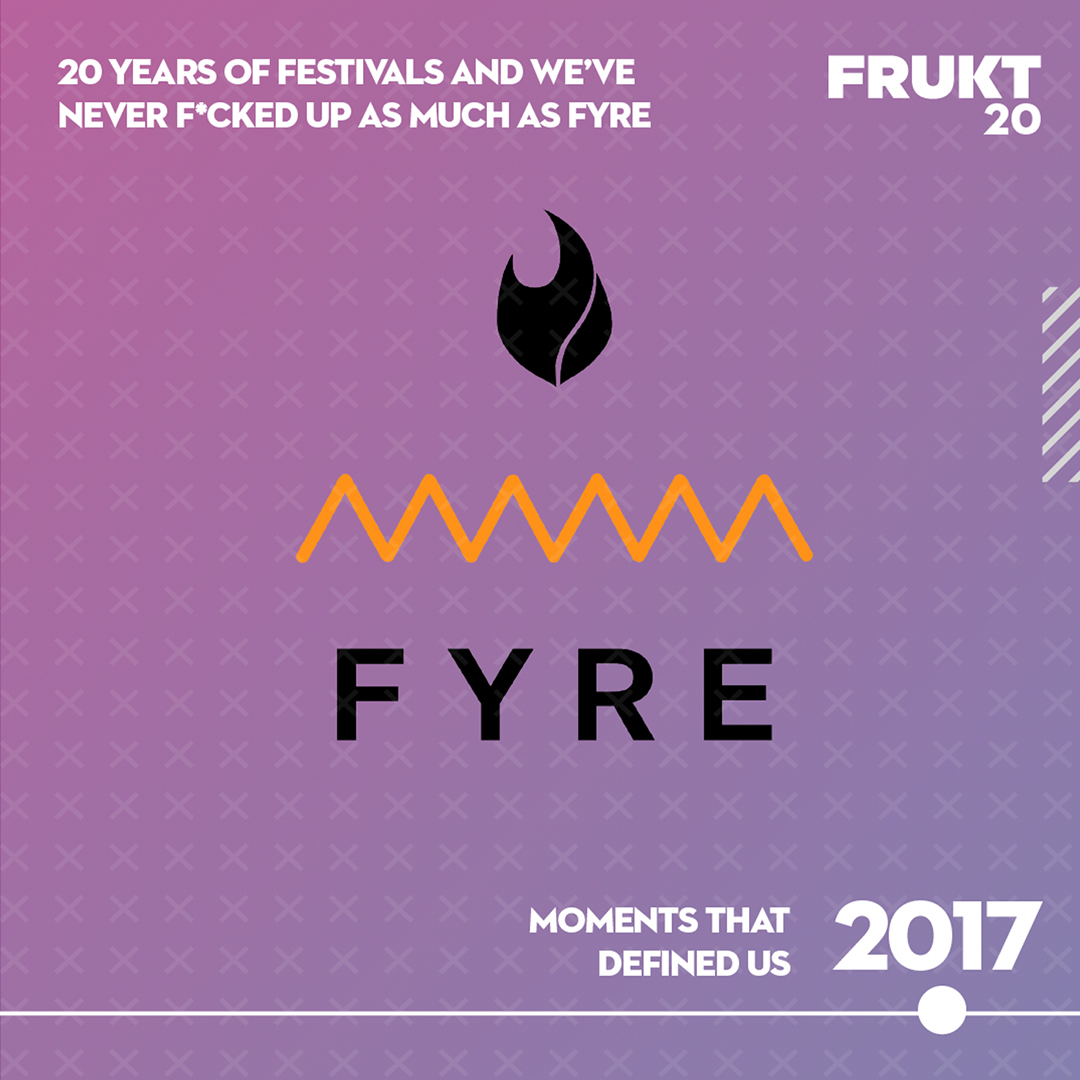 The ultimate, toe-curling case study on how not to plan and run a festival.

“Oh what could have been...

FRUKT knows the complexity and intensity that comes with organising music festivals (we even did 5 years in a row with our Jägerhaus). Promoters put it on the line each time they create a new property so it's also essential the promotion and curation is backed up with rock solid delivery... which brings us to Fyre Festival.

This fiasco will go down in festival folklore as what can happen when an 00's rapper and shady entrepreneur get together to organise an exclusive music event for the 'gram. The warning signs were there from the 43 page pitch deck ("we've crafted a team of rockstars to spread Fyre"). Evian anyone?” 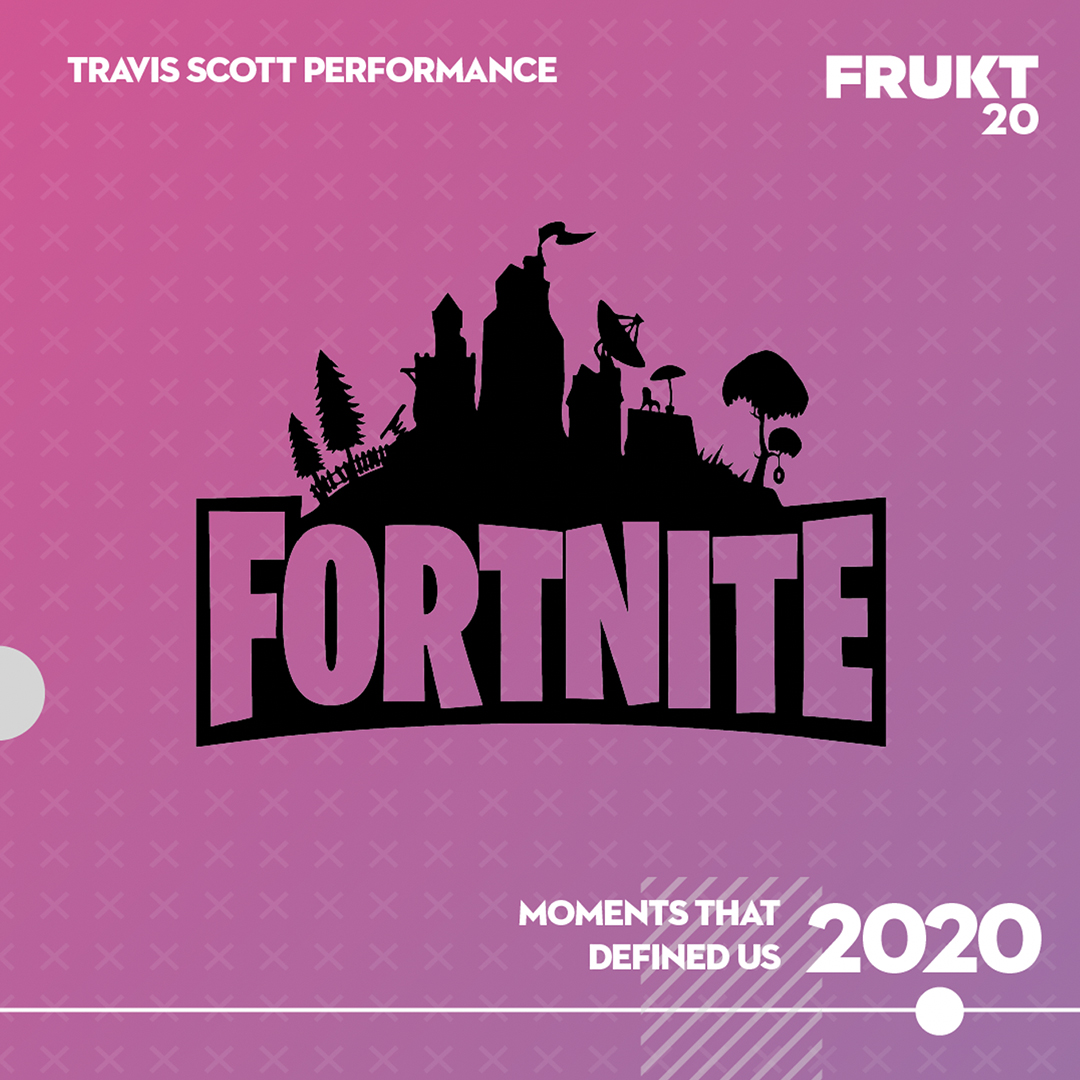 “Fornite has long been known for its in-game events, but when Travis Scott took to the virtual stage, players were immersed in an experience like no other. IRL events will always have boundaries however being in-game the possibilities are endless. We saw a giant Travis Scott, Pyro technics, anti-gravity and more, changing with each track performed, from the comfort of our own homes with our friends.

We use innovative in-game live events as case studies in our piece of thought leadership, The Power of Play, which unpacks Gamers’ core motivations from community to mastery.” 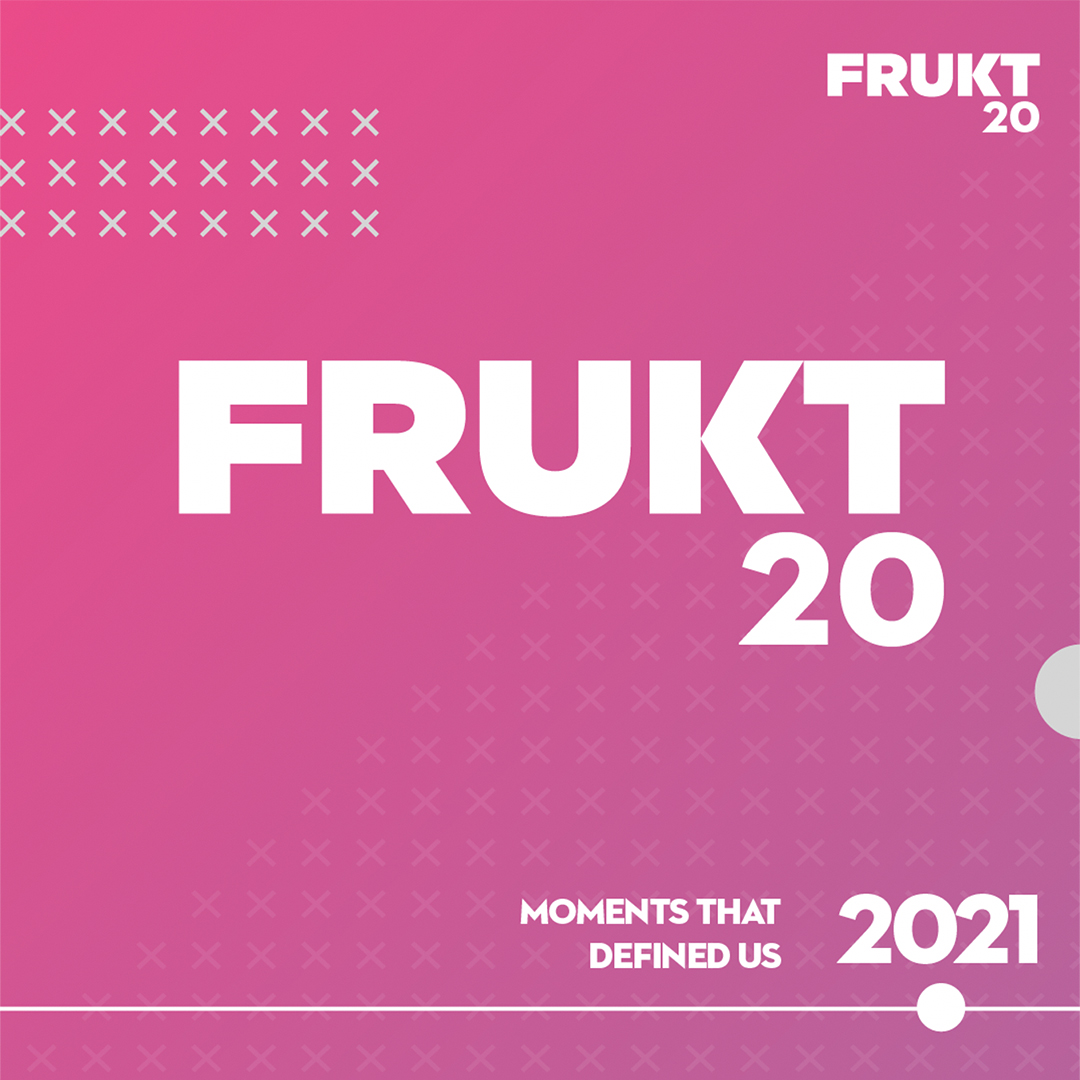 As an agency, we got particularly excited about the continued convergence of entertainment culture this year. Until recently, Music, Gaming, Fashion and Film have existed as distinct verticals. 2021 saw them become increasingly intertwined driven by powerful emerging technologies and a multi-faceted consumer. For those of you who want to swot up on this trend, hop over to our blog and read our reports on Gen Z and The Metaverse. Has there ever been a more exciting time to be connected to the world of entertainment?”