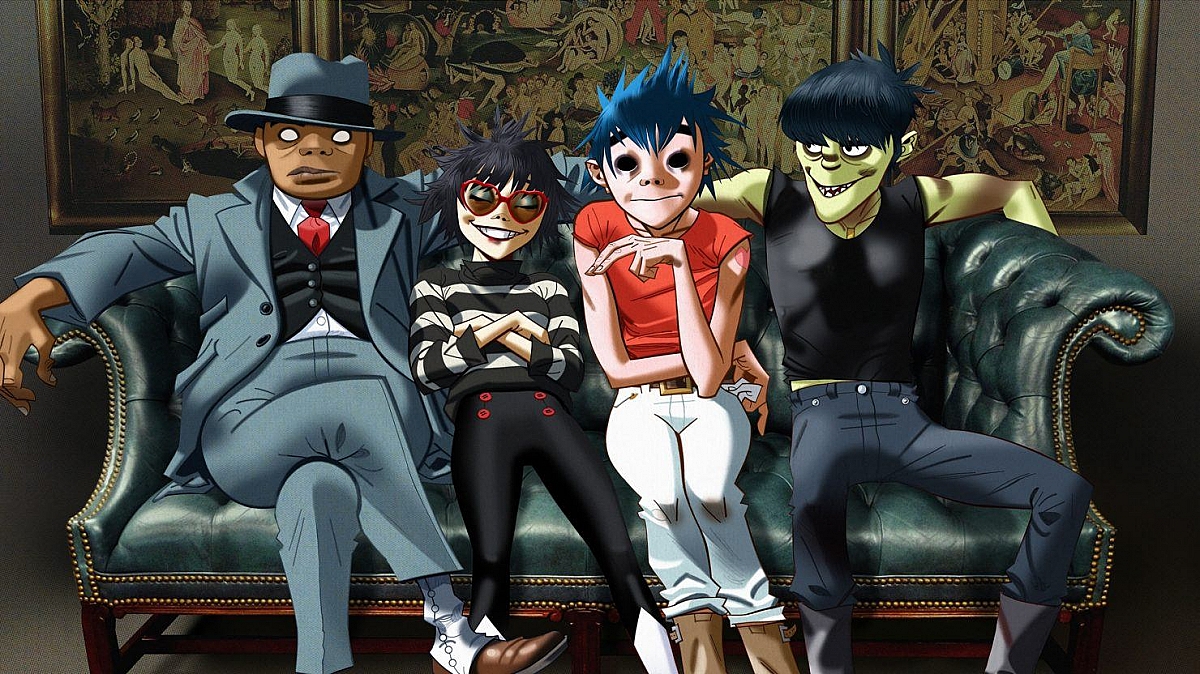 FRUKT caught up with the team at Eleven Management - founders Niamh Byrne & Régine Moylett and Claire O’Brien who heads up partnerships - to discuss Gorillaz innovative approach to brand collaborations.
Posted on 1st February, 2018 by Giles Fitzgerald

Gorillaz have collaborated with a number of brands since they returned with new material, from kit launches with Chelsea FC & Nike to recruiting future talent for Jaguar. What is it about this particular group that brands find so appealing?

Perhaps best answered by the individual brand, but for us here at Eleven Mgmt the beauty of Gorillaz and what makes them attractive and unique is that they offer something for everyone. From a toddler having a wiggle to a catchy melody with beautiful animation to a committed music fan of allegory who loves a live spectacle and for everyone in between, Gorillaz can speak to them. Each of our brand partners, from Hennessy and Red Bull TV at Demon Dayz, to Deutsche Telecom, E.ON, Jaguar, Sonos or YouTube and beyond, appreciate our wide demographic and have enjoyed the engaging platform we provided to tell their particular story. Gorillaz’ collaborative philosophy has resulted in the band having a diverse audience with global reach across all age groups and that remains the ambition, to be democratic and inclusive while embracing new methods and technology. As a result, the work does not date and Gorillaz audience grows by rejuvenating rather than ageing in the traditional way, a process which continues even between campaigns.

The 'Spirit House' installations, in partnership with Sonos, offered up a unique immersive experience across multiple cities.  Can you tell us a bit more about how this all came together?

The ideal brand partnership – and they must each be that, a genuine partnership – is one based on organic common ground. The Spirit House concept began with the album, became real with the Gorillaz app - which was part funded by Deutsche Telecom - and with the Sonos experience it could manifest physically and be available to the listener in a number of cities (NYC, Berlin, Amsterdam, Shanghai). We really want to bring Gorillaz to everyone, to be democratic and non-exclusive and Sonos helped us to achieve that more effectively. It took 3 months to plan and build the experience. It’s very important to the viewer/listener that the detail of the environment is up to standard. It makes for such a much more rewarding experience when the space is as authentic as possible and the great feedback we received here supports that.

With Gorillaz being an animated act, is a much longer lead time needed on campaign creation and turnaround?

In the early days, yes, the lead time was long and even now, the original hand-drawn beautiful animation that is Jamie’s and Gorillaz’ style is expensive to produce, but there’s nothing quite like it. But the timescale has shorted considerably for some projects. We actually use a number of different animation styles concurrently and the viewer is used to it. Recent developments mean we can work much more quickly for certain events. If we want something reactive and spontaneous, we can use motion capture and real-time in a fraction of the time previously needed, which means Gorillaz can react quickly. As usual, the main challenge is in finding just the right creative idea which works for both partners. 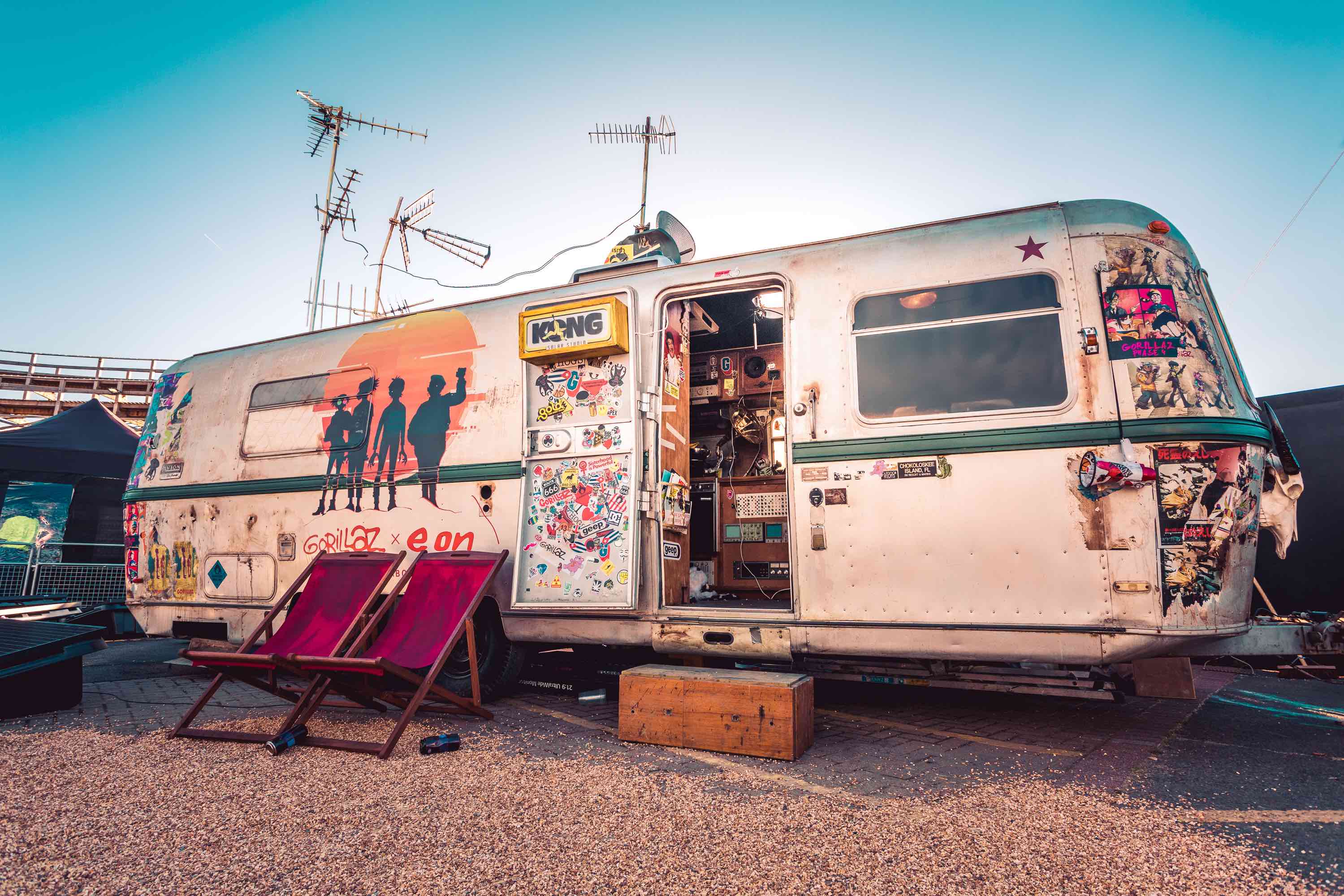 The partnership with energy brand E.ON featured both a solar powered music video and the development of a music studio, what was the vision behind this particular campaign?

Again, Eleven worked closely with E:ON to find common ground. This particular project was discussed and executed over a 6-month period. Using the band’s existing creative ideas and ethos of being pro-DIY and environmentally aware, most notably on 2010’s Plastic Beach, while partnering with the renewable element of E.ON’s story we were able to align both sides with an engaging narrative. Of course, as usual with Gorillaz the seriousness of the subject matter does not preclude it being fun and inclusive, which is where the idea to engage fledgling musical artists came from. Being able to roll the idea out internationally with a physical element (Kong Solar Studio) in multiple locations again ticked all the boxes for us.

“All of our partnerships begin with open and exploratory discussions of what would be ideal, and many of them conclude with something beyond both of our expectations”

Gorillaz took over Margate for the Demon Dayz Festival, which saw them teaming up with Hennessy. What are the key considerations when building a festival based partnership, as opposed to a more direct artist deal?

The concept of a Festival is a simple extension of the Gorillaz collaborative ethos. We had a number of partners, notably Hennessy and Red Bull TV, at Margate, each with their own clear remit and working area so that each had the opportunity to shine. With partnerships, whether at a Festival or singular deal, clarity and transparency are vital as is the right access. Each brand involved with the Festival was clear on what their involvement entailed. Eleven Mgmt listened to what they needed for their audience and provided that in our own particular Gorillaz way to great all-round success.

Innovation plays a key role in Gorillaz’ work, how much of a factor is this in deciding how to approach a partnership?

Innovation is important to everyone, especially in the changing landscape of what the consumer expects and how they/we behave. The key factor is that Gorillaz are real, so they can exist in both the virtual and real world. We love that Jaguar have been able to recruit more than 10 creative software engineers because Gorillaz’ fans have been playing a game in our app, or that unsigned artists can collaborate and record new tracks in E.ON’s Kong Solar Studio – we want to open up opportunities and experiences for fans where they haven’t existed before…which wouldn’t be possible if Gorillaz and brands hadn’t worked successfully together. It’s exciting for us to use the latest technology or approach to enhance the story-telling element, as with our YouTube collaboration on a 360º Spirit House film. All of our partnerships begin with open and exploratory discussions of what would be ideal, and many of them conclude with something beyond both of our expectations.

Niamh and Regine recently won the 2017 MMF (Music Managers Forum) 'Entrepreneur of the Year' Award for their “groundbreaking” campaign for Gorillaz’s Humanz.